Water surface in Brazil reduces 15% since the early 1990s

Where is the water that was here? This was a recurrent question that the MapBiomas scientists asked themselves after analyzing satellite images of the entire national territory between 1985 and 2020. The data, which are available on the website www.mapbiomas.org, indicate a clear trend of surface loss of water in all hydrographic regions, in all biomes of the country.

The coordinator of MapBiomas Água, Carlos Souza Jr., comments that the result is quite worrying because the sign of a trend towards water reduction in Brazil, with data from satellites, is very clear. "Evidence from the field already indicates that people have already started to feel the negative impact with the increase in fires, impact on food production, and energy production, and even with the rationing of water in large urban centers", alert.

According to the researcher, there are several factors that can explain the reduction in the water surface in Brazil over the last 36 years. “The dynamics of land use based on the conversion of the forest to livestock and agriculture interferes with the increase in local temperature and often alters the headwaters of rivers and springs, which can also lead to the siltation of rivers and lakes. Building dams on farms for irrigation, drinking fountains along rivers decreases water flow; and, on a larger scale, the large dams for energy production, with extensive water surfaces subject to evapotranspiration processes that lead to loss of water to the atmosphere”, he says.

The state with the greatest absolute and proportional loss of water surface in the historical series analyzed by the MapBiomas team was Mato Grosso do Sul, with a 57% reduction. If in 1985 the state had more than 1.3 million hectares covered by water, in 2020 there were just over 589 thousand hectares. This reduction took place basically in the Pantanal, but the entire Paraguay basin lost water surface. In second place is Mato Grosso, with a loss of almost 530 thousand hectares, followed by Minas Gerais, with a negative balance, between the water that entered and that which drained, of more than 118,000 hectares.

The Pampa, despite being the smallest Brazilian biome, has the third largest water surface area, mainly due to the large coastal lagoons, Lagoa dos Patos, Lagoa Mangueira and Lagoa Mirim. The Lagoa dos Patos represents around 56% of the water surface of the biome and the three lakes together represent more than 81% of the total water surface.

In the Pampa there is a great density of artificial reservoirs for use in the irrigation of rice cultivation, mostly built before 1985. During the period of analysis of the platform, there was continuity in the creation of new reservoirs, with emphasis on municipalities such as Dom Pedrito and Uruguaiana, both in Rio Grande do Sul.

The construction of artificial reservoirs, in the case of the Pampa, does not imply loss of water in the biome, according to Juliano Schirmbeck, professor and member of the MapBiomas Pampa and MapBiomas Água teams. “On the contrary, it tends to increase the amount of surface water present. The potential negative impacts of these reservoirs are associated with changes in natural drainage networks, reducing the amount of water and its characteristic variations over time in small streams, with unintended consequences for biodiversity and ecosystem services”, he explains.

Among the biomes, the Pampa is the one with the smallest tendency to reduce the water surface, with just over 1% of the total water area in the biome. “In absolute terms, part of the losses observed in the period were offset by the increase in the number of reservoirs. In relative terms, this trend tends to be not very expressive also due to the presence of the large mass of water in the coastal lakes”, comments the researcher.

In general, the loss of the natural water surface due to water stored in structures built by man has worrying consequences in the alteration of the water regime, affecting biodiversity and river dynamics. The Pantanal is one such example, with the construction of hydroelectric plants on the rivers that make up the biome. However, there are dozens of other dams designed for this region, with little contribution to the electrical system and a great potential for impacts.

However, it is still possible to reverse these processes with water resources policies and management. “The first step is to have a diagnosis of the problem at the scale of river basins to identify which factors are compromising the availability of water resources. Second, it is possible to develop a multi-sector action plan to mitigate and even reverse the problem. But we cannot forget that a large part of the solution will depend on reducing greenhouse gas emissions to control the increase in global temperature”, adds the coordinator of MapBiomas Água.

Where is the water in Brazil

This is an unprecedented initiative for territorial mapping of the dynamics of surface water and water bodies for the entire national territory since 1985. Like MapBiomas Fogo, the Water series processed more than 150 thousand images generated by the Landsat 5, 7 and 8 from 1985 to 2020. With the help of artificial intelligence, the area covered by water in each pixel of 30 m X 30 m of the more than 8.5 million square kilometers of Brazilian territory was analyzed over the 36 years between 1985 and 2020, distinguishing natural and anthropic water bodies. In all, 108 terabytes of images were processed, revealing areas, years and months of greater and lesser water coverage. The method also allows you to identify the area with water each month throughout the period, as well as transitions and trends.

The data can be found in annual, monthly and accumulated maps and statistics for any period between 1985 and 2021 on the platform MapBiomas Water, open to all.

See what's new in the MapBiomas Water platform, features presented in the "Exploring the connections of surface and groundwater" Webinar below:

Access the main MapBiomas Water results for the period from 1985 to 2020 in the Fact Sheet. 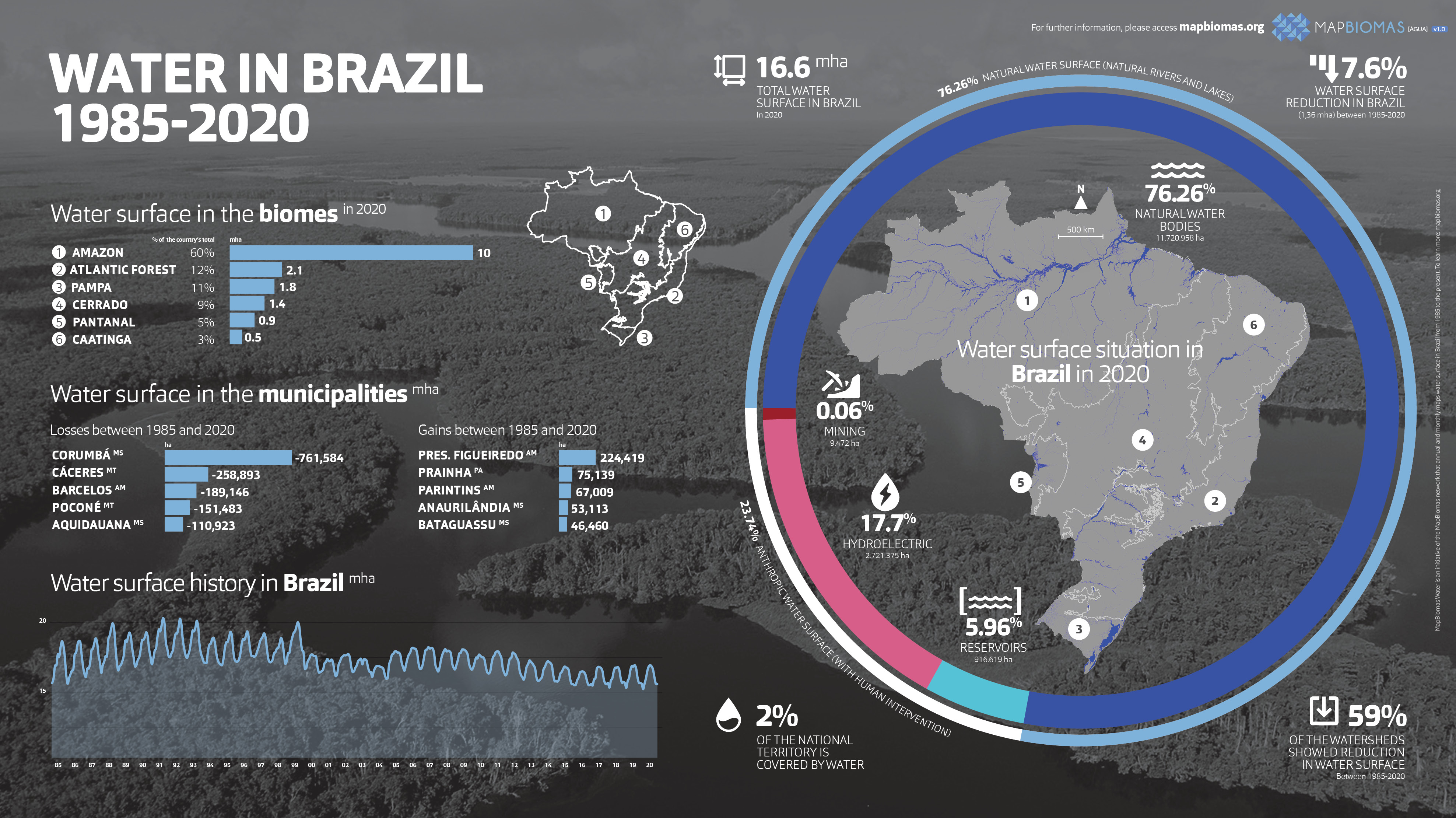 Watch the launch of MapBiomas Water: