Between 1985 and 2020 the area mined in Brazil grew six times, according to the most recent temporal analysis of the Brazilian territory made by MapBiomas. The data, which results from the analysis of satellite images with the aid of artificial intelligence, shows a jump from 31 thousand hectares in 1985 to a total of 206 thousand hectares last year. A good part of this growth was due to expansion in the Amazon forest.

By 2020, three out of every four hectares mined in Brazil were in the Amazon. The biome concentrates 72.5% of the entire area, including industrial mining and gold mining. There are 149,393 ha; of these, 101,100 ha (67.6%) are mined. Almost all (93.7%) of Brazil's garimpo is concentrated in the Amazon. In the case of industrial mining, the biome accounts for practically half (49.2%) of the area occupied by this activity in the country.

Besides being concentrated in the Amazon, garimpo is also characterized by strong expansion in more recent years. Garimpeiro activity surpassed the area associated with industrial mining in 2020: 107,800 ha versus 98,300, respectively. While the expansion of industrial mining occurred incrementally and continuously, at a rate of 2.2 thousand ha per year and without major variations between 1985 and 2020. In the case of garimpo, the situation was different: between 1985 and 2009 the rate of growth was low, around 1.5 thousand ha per year, but from 2010 the expansion rate quadrupled to 6.5 thousand ha per year.

"For the first time, the evolution of mined areas is presented to society, showing the expansion of the entire Brazilian territory since 1985. This is unprecedented data that allows us to understand the different dynamics of the industrial mining and mining areas and their relations, for instance, with commodity prices, conservation units and indigenous lands", says Pedro Walfir, professor at UFPA and coordinator of the MapBiomas Mining Mapping.

When the industrial and mining areas are added together, only 2 states are present in the ranking of the 10 municipalities with the largest mined area: PA, MT.  The first, second and third places - Itaituba (44,854 ha), Jacareacanga (9,450 ha) and Parauapebas (7,558 ha) - are in Pará. The sixth - Peixoto de Azevedo (5,736 ha) - is in Mato Grosso. Minas Gerais does not include in the ranking the municipalities with the largest mined areas, when mining and industrial mining are included.

The map of the municipalities with the most mining activity is slightly different. Without exception, all of the 10 municipalities with the largest mined area are in the south of Pará and north of Mato Grosso, with Itaituba, Jacareacanga, and São Félix do Xingu in first and second and third place, respectively.  This concentration does not appear in the case of the ten municipalities with the largest industrial mined area, which are spread over Pará, Minas Gerais and Amazonas. However, the three largest - Parauapebas (6706 ha), Oriximiná (6278 ha) and Paragominas (5402 ha), are all in Pará, followed by a relevant contribution from Minas Gerais, in Paracatu (3116 ha), Itabira (2963 ha) and Congonhas (2405 ha).

Garimpo and industrial mining also differ with regard to the fruit of mineral exploitation. While iron production (25.4%) and aluminum (25.3%) account for half of the industrial mining area, 86.1% of the mined area is related to gold extraction.

"Mining products are fundamental for the development of a low carbon economy. We hope that this data will contribute to the definition of strategies to end illegal activities and establish mining on a sustainable basis while respecting protected areas and the right of indigenous peoples and meeting the highest standards of care for biodiversity, soil and water," says Tasso Azevedo, General Coordinator of MapBiomas. 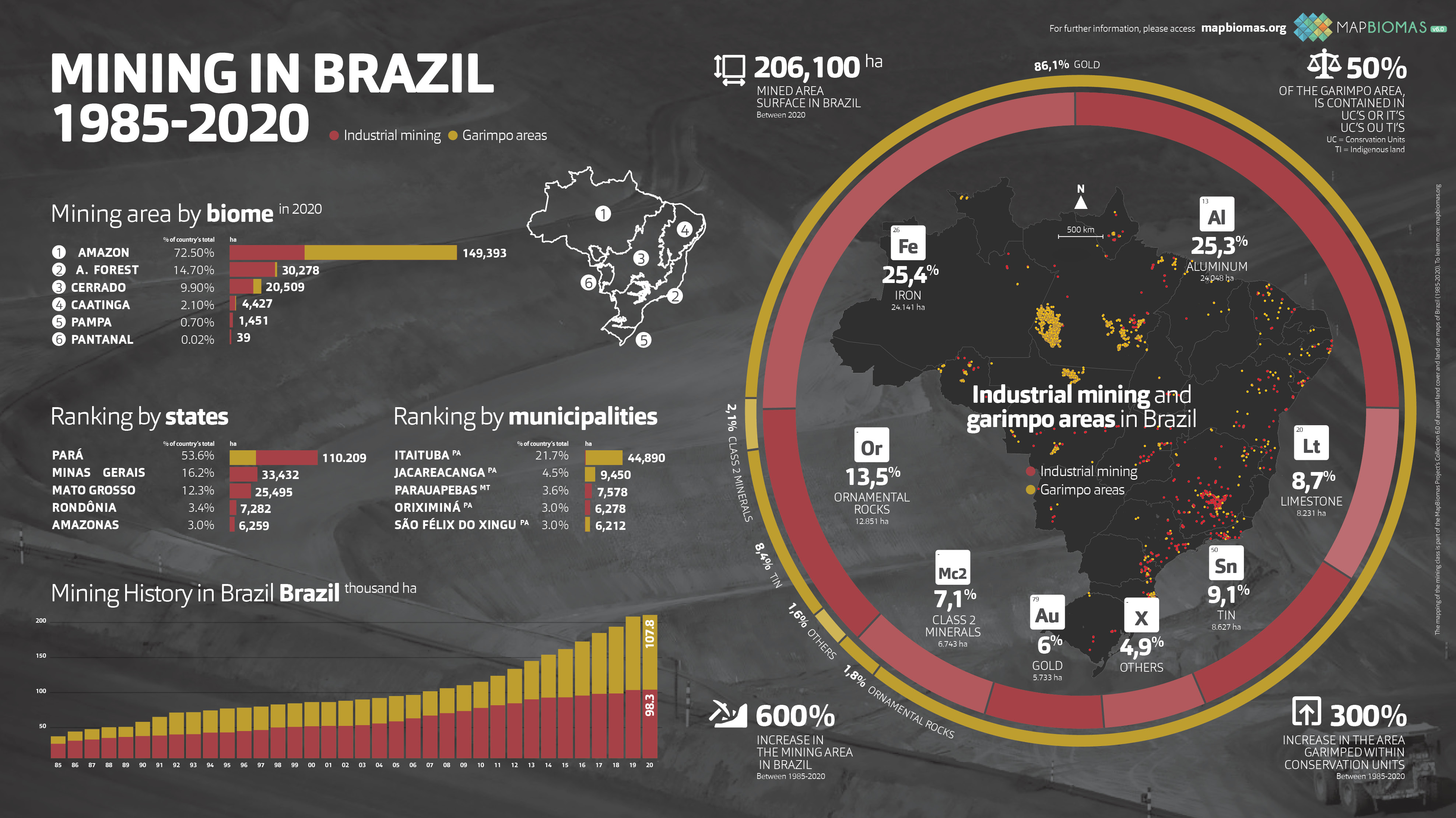